Let's build a bookshelf together :) 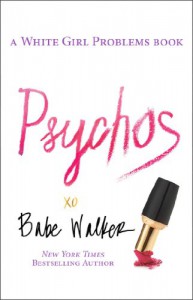 I've been bombarded lately with books on war and horror novels that are extremely long, therefore it was refreshing to dive into a comedy with just the right amount of pages so as to not overwhelm. Having lived in Los Angeles at one time, I could relate to the truth underneath all the satire and this, at times, created very hearty laughs from me.

Babe Walker is a rich and narcissistic socialite-type who really has nothing better to do with her time but complain about how life is so cruel to her. Just released from Cirque, a rehab facility, she is absolutely sure of one thing and that is living a life of complete Zen (or at least her interpretation of it, which I found rather hilarious).

Babe is aware that she has an alter ego who is completely nuts and goes by the name of Babette. She realizes that when she is in the presence of the love of her life, Robert, Babette always makes an unwelcomed appearance. She believes that she could never have a true relationship with Robert like she so desperately wants because she cannot control the other entity that becomes overcommitted and basically psycho.

Not long after Babe's return home from her rehab stint, she starts receiving stalker-type messages written in black lipstick on various items. Naturally she is disturbed by this and decides to take a trip to Europe to escape her threatened demise. Unfortunately for Babe, this stalker doesn't give up so easy and seems to always be lurking around the corner. But who could it be?? Well, of course, you have to read the book to find out.

This is a book that follows another and I am guessing the previous one included her whole rehab fiasco, but all-in-all this was perfectly fine as a stand alone since most of her past that relates to the present time is recapped.

Being satire in nature, of course there were times when I thought, Oh my God, give me a break! and then there were times that I nearly chocked from laughter. There was a balance of both for me so the good and the bad didn't lean one way more than the other really, well until the end, but I will get to that.

If you are easily offended by vulgar language or sex related issues told in all bluntness then you will have to steer clear of this one. I am not sensitive to either of those things and at times I would even think, Did she really just say that? I wanted to quote a particularly funny piece where she discovers the size of a man's penis while working up to sex that is less than favorable, but I have an advance, uncorrected proof so I can't do that yet.

Throughout the book, I seriously kept envisioning the MC as being either Paris Hilton or Cher Holowitz from the movie "Clueless". I would compare this book's type of satire to "Clueless" just to give you an idea of what type of characters that you would read about in this book. Actually I feel that the main character has a little Bridgette Jones naivety to her as well (although it would be the X-rated version).

I nearly gave this one a strong 4 stars, merely because it generated so much laughter and shock from me, but there is a part at the end that I was not too keen about. Unfortunately since it is the end and this does have that bit of "who done it" involved, I can't divulge too much information. But I will say that I don't like tricky scenarios.

Other than that, I enjoyed this book very much for exactly what it was. The over-the-top situations were a nice change from the serious novels I have been reading lately. If you are in need of a good laugh and are not easily offended then this is a must read for you.

One of Us by Tawni O'Dell